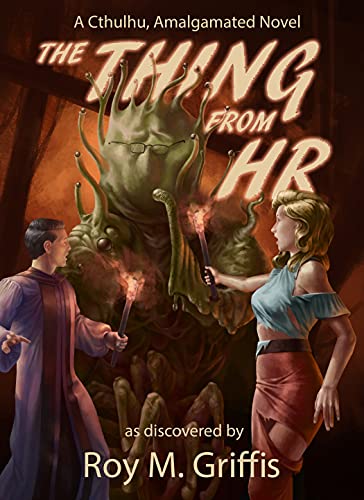 The Thing from HR: a Cthulhu, Amalgamated novel

All Narg had to do was go down among the humans...and pretend to be one of them.
Available on Amazon.com

“A Cthulhian romp that’s equal parts Terry Pratchett and Mel Brooks… and it just might be the funniest novel I’ve ever read.” – Upstream Reviews

Narg was content working as a Damnation Services-10 in HR. Sure, he was related to one of the Elder Gods, but a little nepotism never hurt any Thing. His life was just wailing and gibbering, right up until his Uncle needed a small favor from his nephew.

All Narg had to do was go down among the humans…and pretend to be one of them.

These are not your Grandfather’s tales of Eldritch Horror: this is the untold story of the ghastly, unappreciated (and entirely expendable) minor monstrosities that support the Inscrutable Plans Of Dark Gods And Elder Things Beyond The Knowledge Of Men.

The Cthulhu, Amalgamated series is a comic romp full of action and mystery, including, of course, Sanity-Shattering Horror––and that’s just the paperwork. Even H.P. could not conceive of the Corporate Terrors that await The Thing from HR.

AVAILABLE NOW: Book Two in the Cthulhu, Amalgamated series, The Auditors of Doom.

No, Narg was alone with this problem, as I had been so much of my unlife. I’ll not bore you with tale of my days as a Broodling (Ed. well, maybe just one story of…but, no, I digress).

Within my lonely grotto, I sloshed back and forth, now giving way to private gibbering as I contemplated my options, and then was giving vent to mournful yet tastefully muted shrieking when I realized I had but one option.

There was a summoning being planned among the Hairless Apes. I could feel it.

Worse, I knew it was an unauthorized summoning being perpetuated by the Poo Flingers.

This would not do. Humans had their place in our vile ecosystem, and when they began Mucking About With That Which Man Was Not Meant To Muck, their brief lives and little mudball of a world became very untidy indeed.

There were humans who needed restraining, and I was just the Thing to do it.

Available on Amazon.com
Dear Reader, author’s recently published book “The Thing from HR: a Cthulhu, Amalgamated novel” is now available on leading bookstores, get your copy now and help the author by writing a review of the book.
Share with your network:
Facebook
Twitter
Pinterest
LinkedIn
For Authors
For Authors
Search