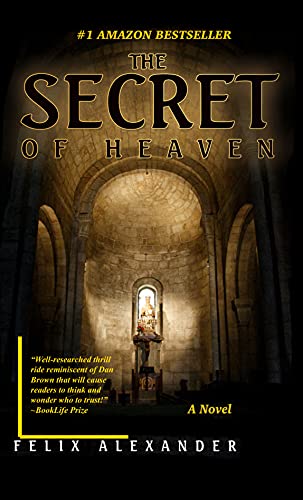 The Secret of Heaven

Things are further complicated when a mysterious stranger warns Aiden that possessing the secret of heaven could cost him his life.
Available on Amazon.com

“Well-researched thrill ride reminiscent of Dan Brown that will cause readers to think and wonder who to trust.” ~BookLife Prize

When investment banker Lazzaro de Medici is found dead, Professor of Biblical Studies at University of Illinois at Chicago Aiden Leonardo is the prime suspect. In possession of an encrypted letter given to him by Lazzaro, Aiden utilizes his extensive knowledge of Scripture to piece together clues that lead to a Lost Bible dating back to the time of Christ.

Hidden within the text is an ancient truth about the most controversial message Jesus left to His disciples. But as Aiden embarks on his quest to unravel the mystery of redemption and faith, a secret organization known only as The Group hunts him down to destroy the Lost Bible and tie up loose ends.

With the help of his fiancé Dr. Miriam Levin—a cultural anthropologist and a professor of historical archaeology in her own right, their friend Nagi, a philologist, religious historian and an eccentric cryptographer, Aiden soon realizes the Lost Bible was written by a disciple who walked with Jesus and had his gospel omitted from Scripture.

Things are further complicated when a mysterious stranger warns Aiden that possessing the secret of heaven could cost him his life. Pursued by the F.B.I. for the ancient Black market relic and the Chicago PD in connection to the murder of Lazzaro de Medici, Aiden races against the clock to prove his innocence and fulfill his mentor’s dying wish.

Expose the secret of heaven…

Available on Amazon.com
Dear Reader, author’s recently published book “The Secret of Heaven” is now available on leading bookstores, get your copy now and help the author by writing a review of the book.
Share with your network:
Facebook
Twitter
Pinterest
LinkedIn
For Authors
For Authors
Search