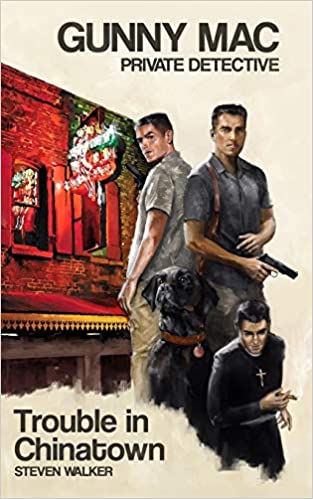 This beautifully written work of fiction is based on a true historical fact, the destruction of all the currency in Hawaii in 1942 by Roosevelt because he felt the Hawaiian Islands would be invaded by the Japanese.
Available on Amazon.com

This beautifully written work of fiction is based on a true historical fact, the destruction of all the currency in Hawaii in 1942 by Roosevelt because he felt the Hawaiian Islands would be invaded by the Japanese.

Two Gunnery Sergeants, a Naval Lt. and a tough former Padre of the First Marine Division with enough medals of valor to fill a empty cigar box set the Hawaii on fire to stop the stealing of millions of dollars.

They have very little knowledge how to be detectives but they know right from wrong and they know how to fight which means throwing out the law book.

Gunny Mac, at five years old is left at a church by his immigrant parents who returned back to their homeland but wanted their child to live a better life in America. At sixteen he joins the Marine Corp, makes it a career and wins the Navy Cross on Guadalcanal…discharged due to wounds.

Gunny Wojohowitz, Mac’s best friend… fought with Mac for seventeen years in the Corps, also recovering from his wounds is still at Mac’s side.

Padre McCaffery a Jesuit priest, former Padre of the First Marine Division, and a Navy Cross winner is recovering from a head wound is not quite the same man… but loves his God, his Marines, his cigars and bourbon.

Together they form a unbreakable bond of brotherhood and fight one last battle for their country and friends.

If you love private eyes, and crime fiction at its best, Gunny Mac private Detective is your best bet for hours of genuine entertainment.

No one writes like this anymore, but Walker does…as Raymond chandler would say, “He talks like a man of his age talks-that is, with a crude wit, a lively sense of the grotesque, a disgust for the sham and a contempt for pettiness!”

Buy Gunny Mac Private Detective Trouble in Chinatown today and get a read of a lifetime!

Available on Amazon.com
Dear Reader, author’s recently published book “Gunny Mac Private Detective Trouble in Chinatown” is now available on leading bookstores, get your copy now and help the author by writing a review of the book.
Share with your network:
Facebook
Twitter
Pinterest
LinkedIn
For Authors
For Authors
Search