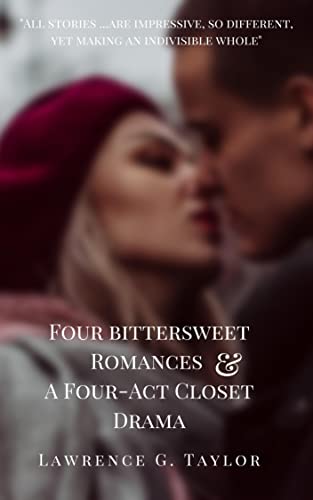 The girls are surprised by the men's bickering and animosity towards each other. As time goes on, the two Swedes become part of the passionate conversation.
Available on Amazon.com

Description “All stories in this book are impressive, so different, yet making an indivisible whole.”– customer review THE BALLAD OF CALLE AND MAJA A slice of romantic realism with two versions of love in play. Maja sends crushes to Calle. He is flattered and infatuated, but cowardice prevents him from approaching Maja. In time, they became friends. Maya is in an unhappy love affair with Jose and has trouble ending it. Calle has much affection for her and intends to help her break the spell Jose has on her. TWO GIRLS IN A CAFÉ Two Girls in the Café is about two friends who claim to know the same man. A heated discussion is erupting. The two girls were once close and met for cake, tea and a chat. They chat and giggle to their heart’s content. Then, by chance, one of them spots a man walking in the street whom she recognises. The other girl claims to know the young man, and the idea amazes the girls that they both know him. A tossup is whether both of the girls met the man. But L.G.Taylor hopes there’s more to the story. Amazon Review: “Contemporary, witty, honest and ironic.” BINKY’S REVERIE Binky is a young romantic man from the Caribbean and Linda, a young Swede. After their friendship in London, Linda invites Binky to Sweden for a holiday. Binky’s hopes are high for a continued love relationship. But there are no guarantees in love. GETTING IT RIGHT, IF EVER A tragicomic fantasy tale. Set in the there are no early 70s in two imaginary countries. TeeGee and Vikland. Molly, 45, invites Benji, 40, to visit her country. Benji’s overwhelmed and seizes his first chance to visit another country. Then one day, Benji catches sight of a woman and becomes infatuated with her appearance. He pursuit is anything but conventional. What are his chances? TELL ME WHO MY ENEMY IS—a four-act closet drama Berry (an Afro-West Indian) and Gun and Kerstin (two Swedish cronies) are socialising. Sam, the Afro-American in time, barges in on the trio. The two black men air opposing views about what’s it like to live in Sweden. Berry becomes belligerent towards Sam. The girls are surprised by the men’s bickering and animosity towards each other. As time goes on, the two Swedes become part of the passionate conversation.

Four Bittersweet Romances & A Four-Act Closet Drama is a collection of short stories and dramatic works penned by author Lawrence G. Taylor. As the title suggests, this work takes on a romantic theme and presents realistic romances with both the highs and lows of emotional sentiment. Centering especially on the cultural differences and intricacies of Caribbean characters, Afro-Americans and those living in and native to Sweden, an interesting set of personalities find themselves in situations ranging from holiday romances being continued to arguments between friends, clashes of culture, and friends-turned-lovers scenarios. The work is better suited to the mature reading audience owing to complex themes and strong romantic but non-explicit content.

Author Lawrence G. Taylor presents a really interesting mix of stories that unify to tell a tale of all the different, difficult facets of romance and dating many of us may face in our lives. For me, the most poignant tales were certainly Binky’s Reverie, and the drama Tell Me Who My Enemy Is as I felt a deep emotional resonance with the pain, disappointment, and conflict in these tales. Balancing this against the romance genre makes for some very exciting reading that will leave you thinking long after closing the book. All of the stories offer something fresh and different for readers of varied tastes. Overall, I would certainly recommend Four Bittersweet Romances & A Four-Act Closet Drama to fans of quirky, realistic romance tales and those who want to be able to engage with an enjoyable quick-read and still take a poignant, satisfying message away from it.

Available on Amazon.com
Dear Reader, author’s recently published book “Four Bittersweet Romances & A Four-Act Closet Drama” is now available on leading bookstores, get your copy now and help the author by writing a review of the book.
Share with your network:
Facebook
Twitter
Pinterest
LinkedIn
For Authors
For Authors
Search