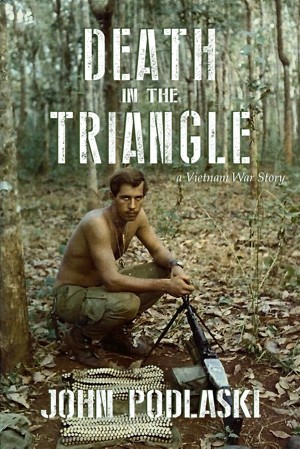 Death in the Triangle: A Vietnam War Story

These soldiers soon found themselves in dire straits to satisfy their battalion commander’s thirst for body counts and fame.
Available on Amazon.com

DEATH IN THE TRIANGLE is a sequel to “When Can I Stop Running?”. That was one hell of a night!
Only a couple of hours passed since returning to the firebase. Now, the sleep-deprived and weary First Platoon soldiers must go back out on another patrol. Last night, an enemy mortar team fired several rounds into the base and was soon silenced by return artillery fire. The Third Squad also ambushed a group of enemy soldiers leaving nine dead bodies on the trail before moving out to a new location. A thorough search of both areas may locate items overlooked in the dark. It was thought to be an easy patrol – two clicks out and two clicks back, so the brass expected their return before lunch. At least, that was the plan.

Many patrols during the Vietnam War did not quite go as planned and this was one of them. These soldiers soon found themselves in dire straits to satisfy their battalion commander’s thirst for body counts and fame. Will they all survive?

Sixpack, Polack, LG, and the bunch are back in this new installment from the award-winning author of “Cherries: A Vietnam War Novel.”

What others are saying about DEATH IN THE TRIANGLE:

“Wow… what an awesome read! Once I started reading, I was a captive and couldn’t put it down as I was so anxious to see what happened next. It is a professionally written story that brought back tons of memories of my time in Vietnam. John nailed it!”
– Joe Fair, author of “Call Sign Dracula: My Tour with the Black Scarves.”

“When reading Death in the Triangle, I could see all the faces, the sweaty jungle, hear all the mind-numbing yet terrifying sounds, smell all the wretched odors, and feel the deepest fears. You said it was fiction. It’s too real to be that. Too honest to be that. A great sequel to When Can I Stop Running?”
– R Scott Ormond, author of “Shadow Soldier: Kilo Eleven.”

“Once the soldiers set out on their patrol, the action is nonstop. Podlaski puts the reader right in the thick of the danger and action in this short story! It truly gives an outsider a better understanding of what the Vietnam War was like.”
– Yvette M Calleiro, author of “The Chronicles of the Diasodz.”

“In “Death in the Triangle” John Podlaski weaves another excellent tale of a small infantry unit, fighting in the lethal caldron of Vietnam’s Iron Triangle. Follow Polack, Sixpack, Doc and other members of the 1st Platoon as they execute their difficult missions. Highly recommended!”
– Joe Campolo Jr, author of “The Kansas NCO trilogy” and “On War, Fishing & Philosophy.”

“Death in the Triangle reveals a richly detailed universe in exquisite detail, just as I remember it, with its sights, sounds, and smells. This story begins right where “When Can I Stop Running” left off. The author is a great story teller and readers will bear witness to the physical and mental hardships these young men overcame to complete the mission. Highly recommended.
– Christopher Gaynor, author of “A Soldier Boy Hears the Distant Guns”. His work also includes a feature story and photos in “Time Magazine.”

“In Death In The Triangle, John Podlaski’s third intriguing tome about the Vietnam War, John pulls you into the real experience of combat soldiers with his seat of the pants, painstakingly frank, truthful account of what real combat was like for our warriors. John, a decorated veteran of that war, tells the story of the daily trials and tribulations of a group of veterans, as only a person who has ‘done that/been there’ could.
John’s down-to-earth, regular guy portrayal of those experiences, reflected and influenced in his writing by his personal memories, takes us to Vietnam and the Triangle. You’ll cringe, weep, laugh, shudder, and feel this whole story like you were there; not wanting to set it down.”
– Jerry Kunnath, outdoor writer Member of the Michigan Outdoor Writers association

Available on Amazon.com
Dear Reader, author’s recently published book “Death in the Triangle: A Vietnam War Story” is now available on leading bookstores, get your copy now and help the author by writing a review of the book.
Share with your network:
Facebook
Twitter
Pinterest
LinkedIn
For Authors
For Authors
Search